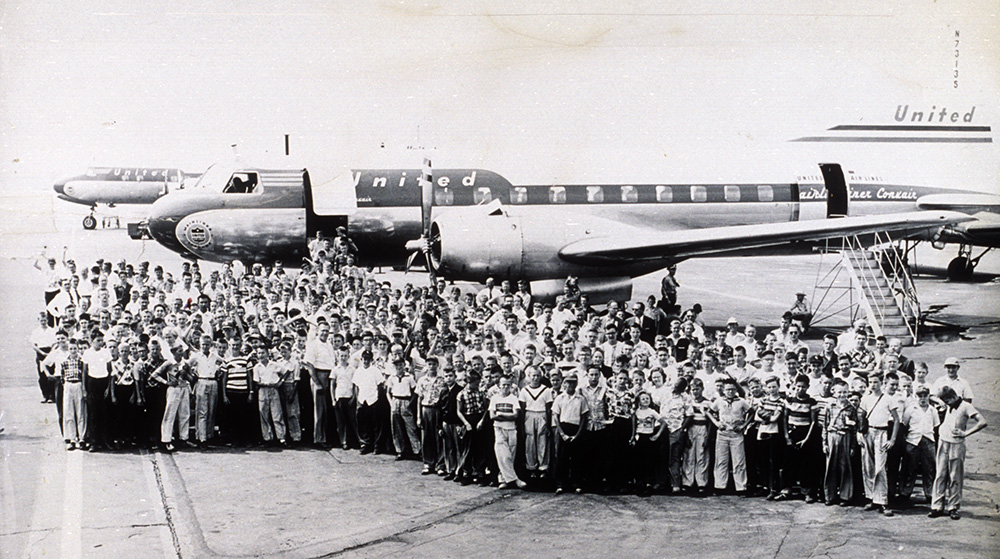 Ever since the dashing French aviator René Simon completed the area’s first recorded airplane flight in 1911, our region has played an exciting and often pivotal role in aviation history. In 1929, South Bend International Airport saw its beginnings when Vincent Bendix, founder of the Bendix Aviation Corporation, purchased 610 acres northwest of South Bend, IN.

When the airport first opened, flights were logged on a chalkboard posted outdoors, near a dirt runway. Today, SBN serves hundreds of thousands of air, rail and bus passengers every year. And, of course, our runway is paved!

A lot has happened at SBN since its early days. Here is a collection of some of the biggest moments in our history:

1929 – A German Dirigible, the Graf Zeppelin, flies over St. Joseph County on its world tour.

– Vincent Bendix, founder of the Bendix Aviation Corporation, purchases 610 acres northwest of South Bend on which to build an airport. 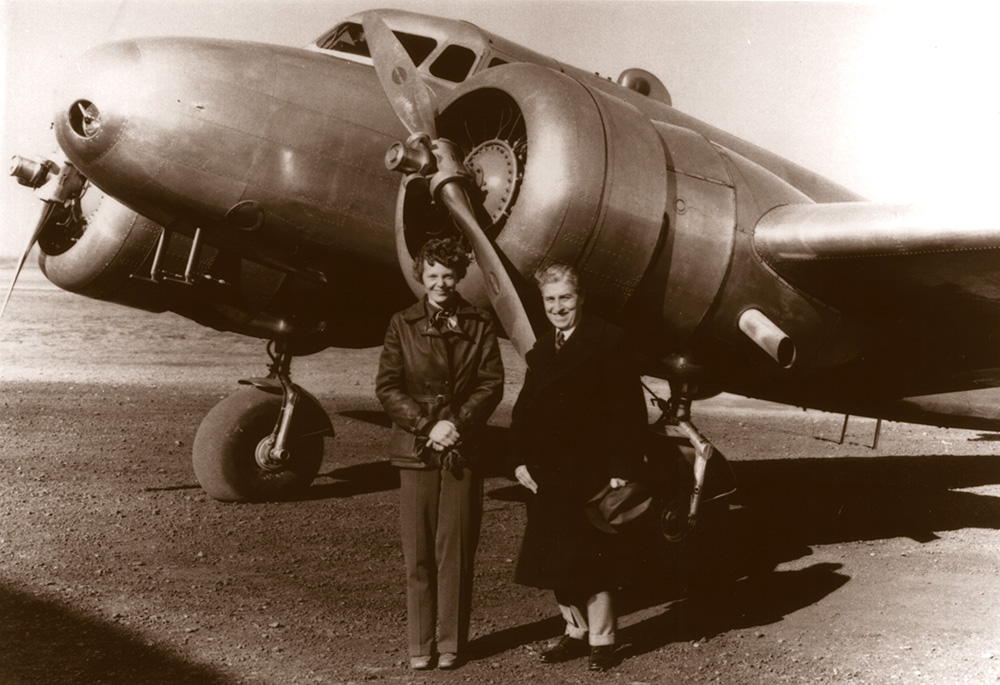 1931 – The inaugural Bendix Trophy airplane race from Los Angeles to Cleveland is won by Major James H. Doolittle. His average speed is 223 miles per hour.

1933 – In a ceremony attended by more than 20,000 spectators, Vincent Bendix christens the airport “Bendix Municipal Airport.”

1936 – Amelia Earhart lands her Lockheed Electra at Bendix Field just a few months before her aircraft disappeared in an attempted around-the-world flight.

– The city purchases Bendix Field from Vincent Bendix for $198,000. The field is renamed Bendix Field-St. Joseph County Airport after ownership is transferred to the County. 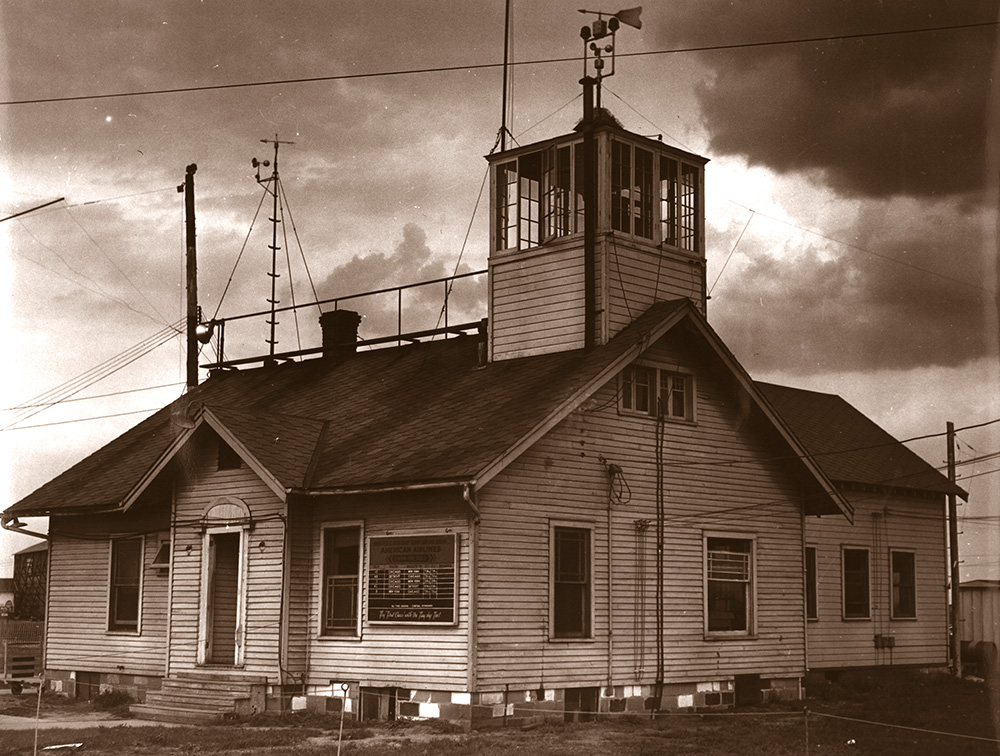 1941 – The airport’s administration building has arrivals and departures posted outside.

1942-1945 – Homer Stockert serves as chief test pilot for the P-47 Thunderbolt fighter plane. Stockert operated the Stockert Flying Service for 42 years at the airport, teaching more than 1,000 men and women to fly.

1949 – A new terminal and control tower is completed at the airport.

1957 – A wildly cheering crowd of 3,000 welcomes home the Notre Dame Fighting Irish football team after a 23-21 victory over Army. 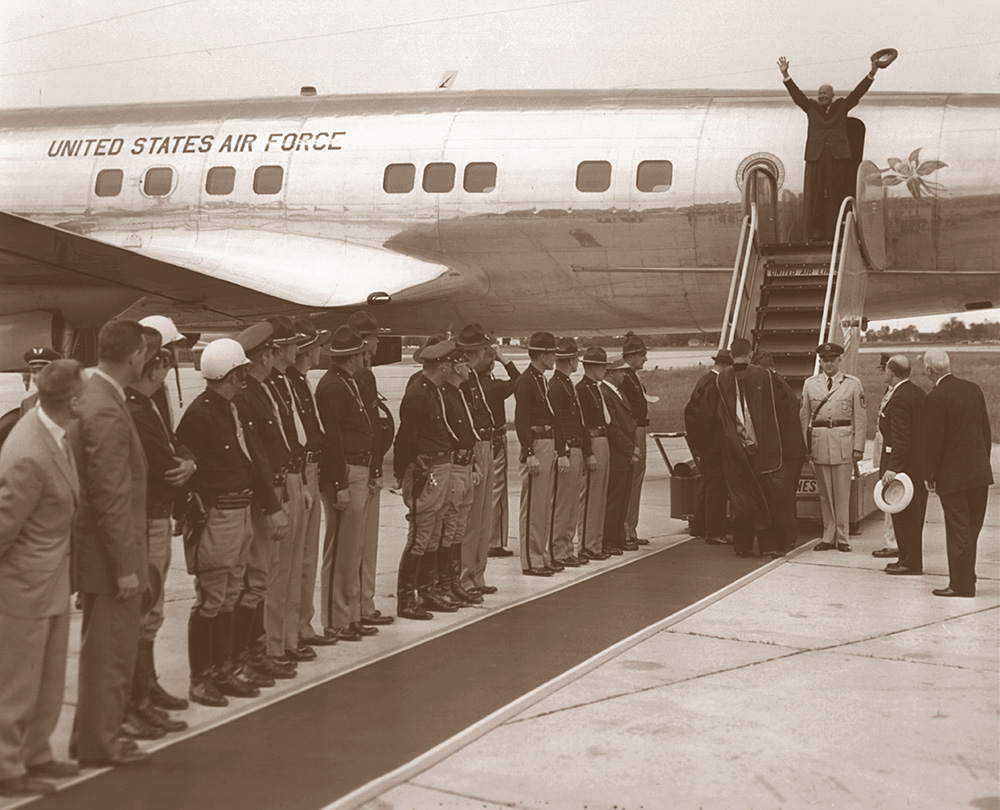 1960 – President Eisenhower arrives at the airport. Every president since has landed at South Bend International Airport.

1962 – Last Bendix Trophy race is won by Capt. John Walton. His average speed is 1,214 miles per hour — five times as fast as the first race!

1967 – United Airlines inaugurates commercial jet service at the airport with a flight from South Bend to New York City by way of Fort Wayne, IN. 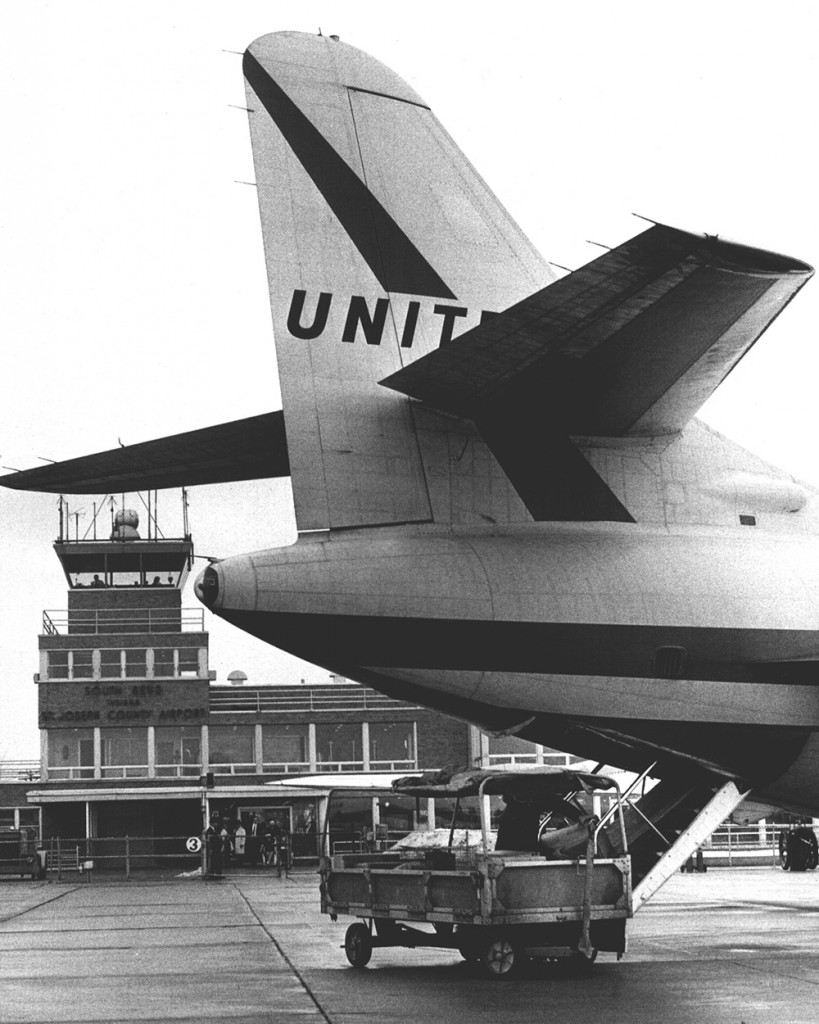 1971 – An airport surveillance radar system is put in use by air traffic controllers.

1974 – The St. Joseph County Airport Authority is created and the airport’s name is changed to Michiana Regional Airport to reflect the regional nature of the airport.

1986 – The airport is granted Foreign Trade Zone status by the U.S. Department of Commerce, which provides a valuable tool for businesses involved in foreign trade.

1987 – Michiana Regional Airport welcomes the International Summer Special Olympics Games. More than 100 Cessna jet aircraft land at the airport in one day, bringing participants from all over the country. 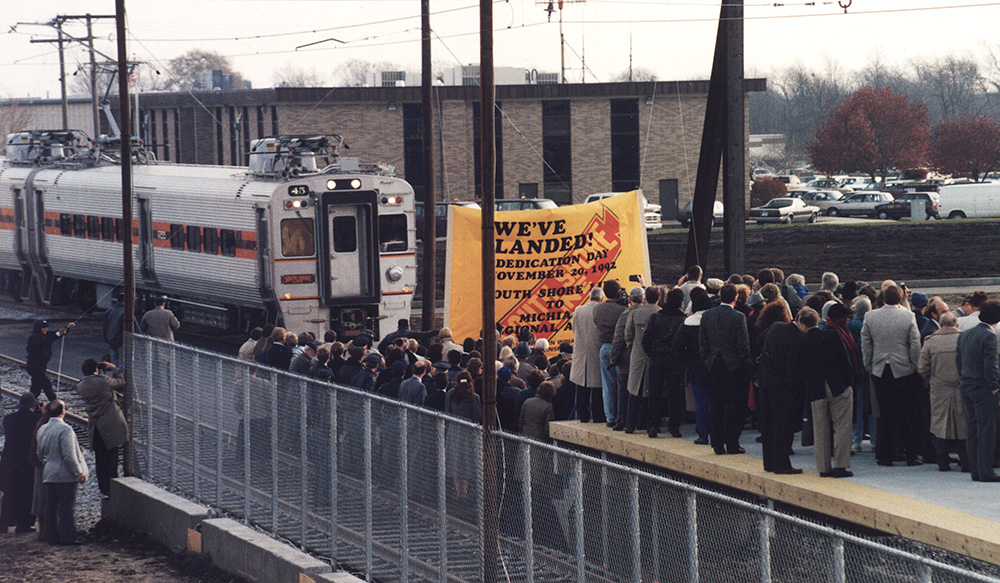 1999 – The Authority Board signs a resolution changing the name to South Bend Regional Airport. Throughout all of the airport’s name changes, its call letters have remained SBN.

2001 – A study shows that SBN has an economic impact of nearly $323 million, demonstrating that the airport is a key part of the economic health of the greater Michiana community and indicates it will be a major force in the region’s future growth and prosperity.

2002 – SBN completes the first phase of a new Master Plan, which will support the future development of aviation and related aeronautical businesses. Thirteen hundred feet of pavement is added to the airport’s main runway, bringing the total length to 8,400 feet. Two taxiways are also lengthened. Future expansion is planned as the airport enters a new century of flight!

2003 – SBN commemorates the 100th anniversary of powered flight by welcoming a national air tour of 25 vintage airplanes to the airport and by hosting a community-wide celebration.

2004 – The airport completes a $619,000 parking improvement program, including the introduction of valet parking, as well as two new payment options: ticketless and pay-on-foot. SBN also begins offering the first 15 minutes of parking free of charge in the short-term lot.

One of the largest air freight companies in the world, Airborne/DHL completes construction of a new 50,000-square-foot facility at SBN.

2005 – SBN is reported to generate nearly $380 million in economic activity in the Michiana region, according to an economic impact study by the Aviation Association of Indiana. It is an increase of $20 million over a study conducted two years earlier.

2006 – SBN is a recipient of the Supplier Diversity Economic Empowerment Award from the Minority and Women Business Development Office of St. Joseph County.

SBN’s first “Stakeholder of the Year” award is presented to Republic Parking System in recognition of the company’s significant parking improvements at the airport over the past two years. SBN honors individuals in the fire, police and EMS fields with the creation of the William T. Schmidt Lifetime Education and Achievement Award. Schmidt was a consultant for SBN on aircraft rescue and firefighting matters for several years up to his passing in 1994. The inaugural Schmidt Awards for 2005 and 2006 are presented, respectively, to Lt. Keith Schweizer of the South Bend Police Department and Chief Luther Taylor of the South Bend Fire Department.

2007 – The completion of an 1,100-foot addition to the North-South runway (for a total of 7,100 feet of length) is a milestone in SBN’s long-range Master Airport Improvement Plan. This expansion allows the runway to accept larger aircraft for arrivals and departures, paving the way for growth at SBN.

The Air Traffic Quarterly Report lists SBN as the top airport in the Great Lakes Region for domestic load factor—aviation lingo meaning the percentage of seats filled on each flight. SBN’s load factor exceeds that of both O’Hare and Midway airports in Chicago.

Service to Indianapolis, with a continuation to Evansville, begins via Cape Air. 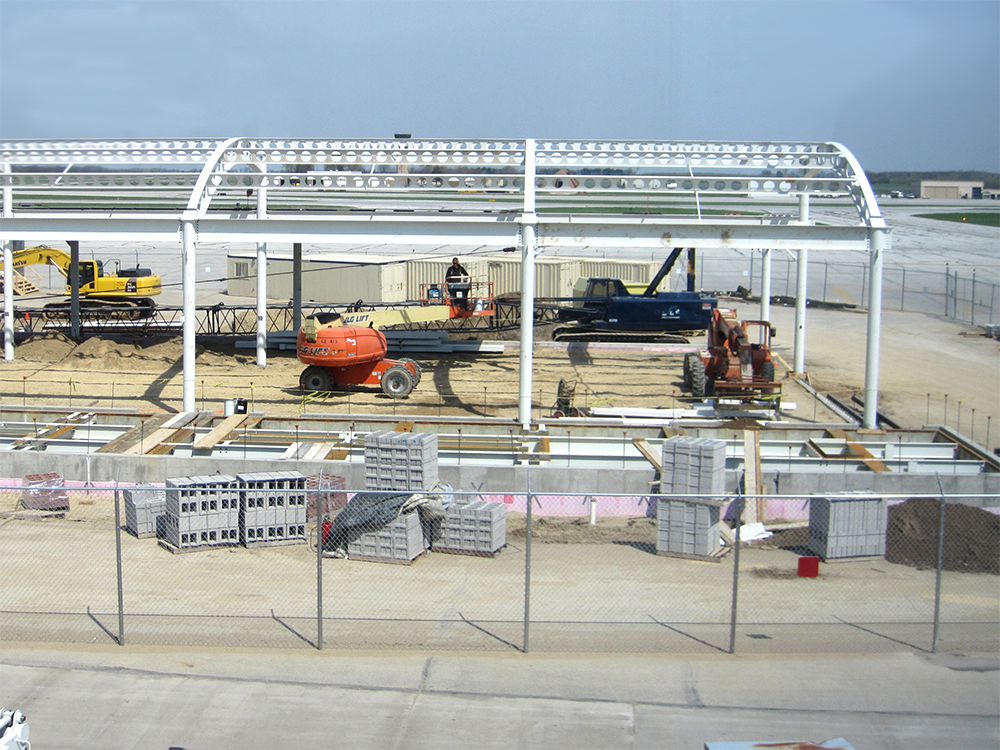 2010 – A new 45,000-square-foot concourse expansion opens in November 2010 and is fully complete in February 2012. The terminal features nine gates and popular passenger amenities, including a full-service deli and bar, business center, newsstand and children’s play area.

2013 – After just 11 months of service, Frontier ceases operations at SBN. Despite the loss of Frontier, the existence of that service opened the door for conversations with other airlines, eventually leading to the addition of service to Newark on United Airlines.

2014 – U.S. Customs and Border Protection grants SBN its international designation. Design begins on a Federal Inspection Station and General Aviation Facility. These facilities are needed to land commercial and corporate/private international flights — a big step for future service at SBN.

SBN chooses a new, local concessionaire — South Bend Chocolate Company — to operate the food and beverage services at the airport.

2016 – SBN hosts the first ever Wings For Autism program in Indiana. This event helped fifty families overcome their anxiety about the challenges of flying by giving them the opportunity to complete a “rehearsal” process of what to expect at an airport. 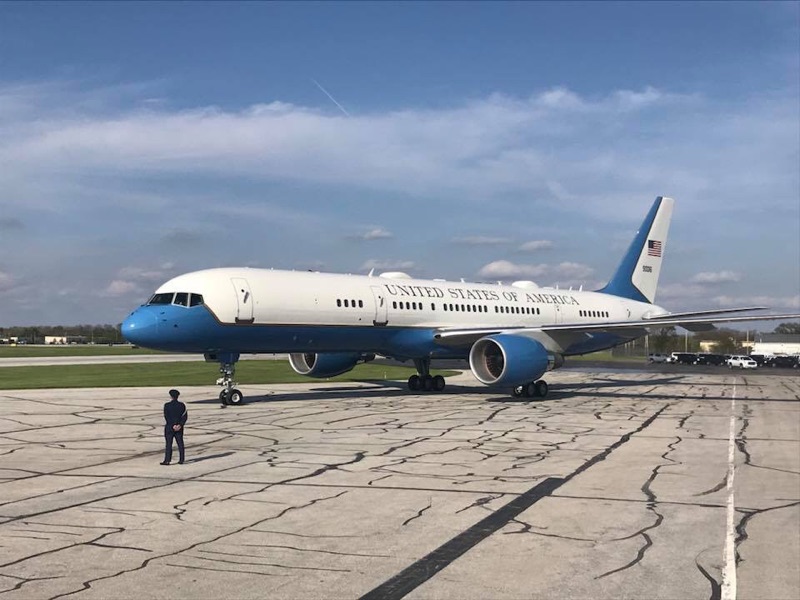 2018 – For the first time in SBN’s history, Air Force One and Air Force Two arrive together. President Trump and Vice President Pence attend a rally in Elkhart, Indiana on May 10, 2018.

2020 – In March the global COVID-19 pandemic impacts aviation unlike anything the industry has ever seen. By April, passenger traffic was down 95%. SBN remained open and operational for essential travel.